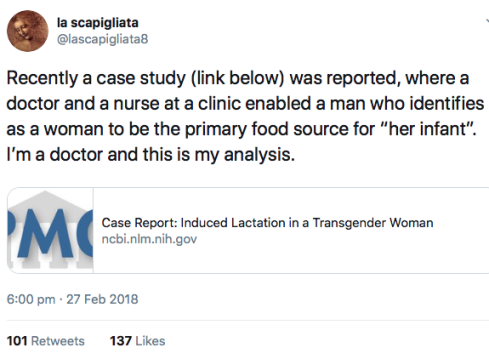 Recently a case study was reported, where a doctor and a nurse at a clinic used a cocktail of medications to enable a transwoman to fulfill his goal to breastfeed his adopted infant.

In this article, I will refer to their patient as “trans-identified male” and “he” because there are few fields of medicine in which correctly identifying patient’s sex is more pertinent than in pregnancy, birth and breastfeeding.

As a doctor, I have multiple concerns regarding this study and this is my analysis.

There is no evidence that clinicians who conducted this experiment met with or interviewed the mother to confirm these claims or that they obtained informed consent from the mother by discussing possible risks that male drug-induced nipple discharge could pose to the infant.

The trans-identified male patient was reported to have a medical history of “gender incongruence”  but he hasn’t had any gender reassignment surgeries, which means that he was a fully sexed male. There was no other relevant medical history reported.

On presentation, the patient was on a gender-affirming regimen that included spironolactone (a heart medication used in this case as an androgen blocker), estradiol, micronised progesterone and “occasional” clonazepam and zolpidem for panic disorder and insomnia.

At initial appointment, the patient had gynaecomastia (abnormally enlarged breasts in a man, Tanner stage V) that was likely a side effect of spironolactone and cross-sex hormones he was taking.

Interestingly, it’s unclear what was the patient’s serum testosterone level, because two markedly different results were given, one in the body of text – 256 ng/dL – and another in the results table 1. – 20.52 ng/dL. 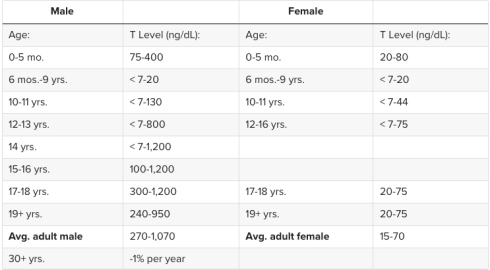 This is problematic not only because it constitutes a glaring inconsistency within the report, but also because the higher result indicates that the patient had male testosterone levels. Considering that the study reported no further testosterone data, indicating that they didn’t measure his testosterone level at any other point in the study, and that  75% of trans-identified men on spironolactone fail to reach testosterone level in the female range, and those who augment the treatment with estradiol have variable response, there is no reliable evidence that adequate androgen blockade was achieved, even though authors claimed that androgen blockade was an important part of the regimen.

This can cause medical complications such as precocious puberty, but also there’s evidence that such exposure is connected with gender non-conforming behaviour later in childhood.

Considering that gender non-conformance is currently an indication for diagnosing children as “transgender” and results in starting them on the highly experimental and potentially dangerous medical path to “gender reassignment”, which typically involves controversial treatment with puberty blockers and cross-sex hormones, the possible consequences need to be considered. 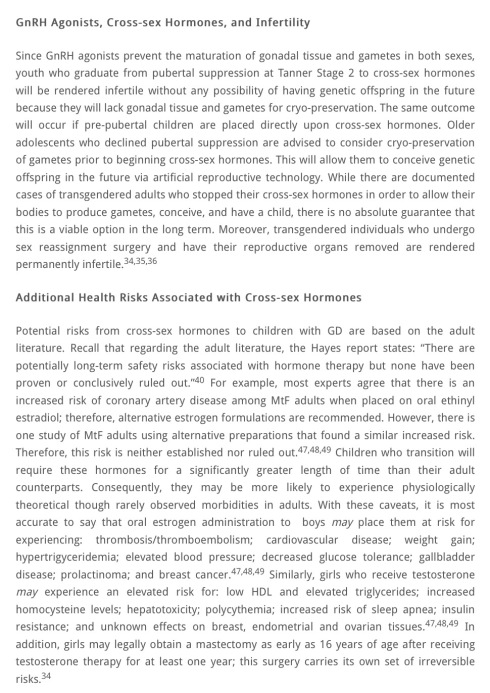 Because there are no studies proving absence of risk, there are ethical issues with enabling a man whose testosterone suppression isn’t adequately demonstrated, to breastfeed a potentially female infant.

And this brings us to another glaring omission in this report. While the authors consistently refer to the trans-identified male patient as “she”, they don’t state the sex of the infant involved in this experiment, revealing a worrying disinterest in the infant itself.

Clinicians also reported that their patient used domperidone, a drug that is banned in the US and is only used off-label internationally to induce lactation. Domperidone was sometimes used to treat reflux, but has been discontinued for use in children due to potential cardiac side-effects.

Even in countries where domperidone is given to mothers to stimulate lactation, it requires ensuring that the infant doesn’t have heart or liver abnormalities. There’s no evidence that clinic attempted to ascertain this.

Furthermore, there’s no evidence that the patient stopped using  clonazepam , which can cause sedation in infants, or zolpidem (also known as Ambien), which could exacerbate effects of clonazepam, after the breastfeeding commenced.

When we talk about safety of drugs in breastfeeding, we weigh benefits of breastfeeding on health and bonding between mother and child, with risks of withdrawing medically necessary medicines mother might be taking.

Mothers who take medications that could be passed to their babies via breastmilk often decide not to breastfeed just so that they don’t risk affecting their baby’s health. Contrast this with a man who takes unnecessary medications, one of which is banned in the US, just so that he can fulfill his desire to breastfeed.

It’s worth mentioning that nipple discharge in men is always abnormal and a consequence of pathologically elevated prolactin due to certain medical conditions or a side effect of some medications.

There’s historical evidence of some men breastfeeding babies, eg. after wife’s death, but it was recognised that men’s milk was a poor substitute which, by maintaining hydration, may have helped infants survive in most adverse circumstances. We have no way of knowing but it is likely these men simply happened to have one of the abovementioned abnormalities,

Be as it may, following the regimen of medications and usage of a breast pump (as per stated protocol) the patient started to lactate, producing 8 oz of milk daily, and after the baby was born, he was reported to have been the sole source of this baby’s nurishment for 6 weeks.

Considering that a 5 lb baby needs about 12 oz of breastmilk, and more as their weight increases. 8 oz was clearly never enough, so authors’ claim that their patient managed to achieve the volume of milk that allowed him to be the sole source of nourishment for her child for 6 weeks is incorrect.

Furthermore, the authors’ claim that at 6 weeks, the patient began supplementing breastfeedings with 4–8 oz of Similac brand formula daily and they ressure us but give no evidence that “the child’s pediatrician reported that the child’s growth, feeding, and bowel habits were developmentally appropriate”.

This raises serious concerns about authenticity of the entire report. As far as can be ascertained from the study, authors never observed any breastfeeding nor did they meet the mother or the infant.

But let’s assume for the sake of the argument that somehow this case study was indeed based on real events, and that the infant survived for 6 weeks on 8oz of male drug-induced galactorrhea a day.

Mother’s breastmilk in context of pregnancy isn’t the same as drug-induced galactorrhea in a man, nor is breastmilk static in composition. It starts as colostrum (birth – 4 days) which is a thick fluid full of fat, vitamins and immunoglobulins. Then it changes to more calorific transitional milk (4 days – 2 weeks), which is high in fat and vitamins, and after that it becomes mature milk which is 90% water.

The authors of this study gave no indication that they analysed the content of this man’s nipple discharge, even though they talked at length about benefits of breastfeeding on mother and baby, none of which were applicable to their male patient or indeed the infant he allegedly fed.

Furthermore, mothers who don’t want to or are unable to breastfeed, are required to use baby formula, which closely approximates the nutritional content of mother’s milk at each stage, and are obliged to use it in adequate amounts. Why was their trans-identified male patient held to a drastically different standard of infant care?

Why didn’t this study explore reasons for this fully sexed male’s interest in breastfeeding a newborn?  Considering that psychosexual disorders such as autogynaephilia are present in a proportion of typically fully sexed heterosexual males who identify as transwomen, this is an ethical issue.

There was also no mention of what kind of clinic this was. If this was an Obs&Gynae clinic, their primary responsibility was to the mother and child. If this was a transgender clinic, they had no business managing breastfeeding of an infant.

In my opinion, this study is an example of how transgender health clinics prioritise emotional needs of trans-identified males over the welfare of women and children and it is an unethical study, fraught with incomplete and misleading information, disingenuous analysis and undeclared conflict of interest.

“Gender is not a binary, it’s a hierarchy, global in its reach, sadistic in its practice, murderous in its conclusion, just like race, just like class.”
Lierre Keith